At this session, the Baltic Unity Medals were also awarded to those who have assisted in creating Baltic collaboration as well as strengthening unity within their homeland and between the Baltic countries. Among those who received the medal was the director of the documentary film “The Story of the Baltic University,” journalist Helga Merits from the Netherlands. The President of the Baltic Assembly, Aadu Must presented Helga with the medal. 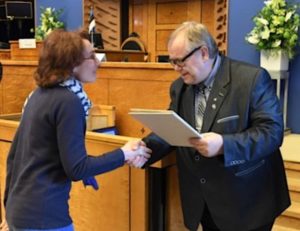 Helga Merits is currently working on her fourth film on the topic of refugees. This film will focus on the Geislingen refugee camp. The film in unfinished as finding funding has been complicated. If any “Eesti Elu” (“Estonian Life”) readers are interested in supporting Helga Merits’ next film, this can be done through the Estonian Studies Centre. Please contact Piret Noorhani, 416 925 9405 or email: piret.noorhani@vemu.ca.