Virtual Exhibition “Lithuanian Diaspora Press after the Year of 1990” 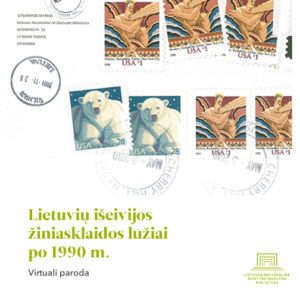 On July 17, 2020, the Day of Lithuanian Unity in the World, the National Library of Lithuania presented a new virtual exhibition dedicated to the Lithuanian press abroad after 1990.

The exhibition consists of seven chapters. It invites to learn more about the newspapers and magazines published in Europe, the United States of America, South America, Canada and Australia. Extremely rich and diverse corpus of Lithuanian press published in the US is worth a separate exhibition, for example, the daily Draugas, founded in 1909, is the oldest Lithuanian newspaper published without a break in the world.

Topical issues of the Lithuanian press in America are also discussed in the section on periodicals which have been transferred to Lithuania after the country regained independence. Lithuanian radio and television programs abroad also receive special attention in the exhibition: from the Margutis Radio Program, founded in 1932 in Chicago, to the contemporary podcasts accessible on the Internet.

The tendency to move to the virtual space is discussed in detail in the last chapter of the exhibition. The websites of Lithuanian communities abroad, the Lithuanian February 16th Gymnasium in Germany, the US-based online newspaper for youth, Laikai vaikams, and other websites are presented here.

Having started working on the exhibition during quarantine, the curators had a chance to look at it from a slightly different angle. When working from home, they had to rely on their knowledge, experience, intuition and sources available on the Internet (fortunately, many publications have been digitized and are available on the Internet, for example, on the portal Epaveldas.lt). But the most important thing was to ask questions. In this way, contacts with the editors of the publications have been established and in many cases, renewed. The Library collections have been supplemented with the missing issues.

Only a small part of the Lithuanian media existing abroad has made into the exhibition. The visitor will not find a carefully compiled bibliography, only a few characteristic examples that will help him or her to see a vibrant and, most importantly, open to change Lithuanian media abroad.

Soon the exhibition will be available in English. You can access the Lithuanian version here: https://parodos.lnb.lt/exhibits/show/iseivijos-ziniasklaidos-luziai