VEMU ÖÖTV participated in the Estonian Night of Museums, taking viewers on a journey through Estonian-Canadian history, music, and stories 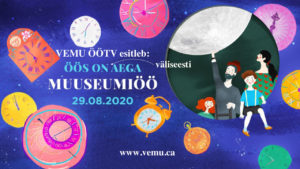 On Saturday August 29th, VEMU, the Museum of Estonians Abroad, took part in the vibrant pan-European tradition known as the Night of Museums. In Estonia, this is known as Muuseumiöö. It’s a celebration of the wonders of night, and the discovery of those wonders that we can find in museums.

The tradition that started in Germany in the late 90s has spread across Europe and beyond into Asia and South America. In Estonia, museums of all varieties have been taking part in this celebration since 2009, showcasing fascinating stories and artifacts for visitors in the rousing atmosphere of the evening. People from every corner of Estonia have been enjoying a rich program of events that includes everything from genealogical walks to puppet theatre shows.

Last year alone, over 100,000 visits were made to Estonian museums on the night. This time VEMU brought their own interpretation of the event for the first time ever with VEMU ÖÖTV (VEMU Night TV), a special virtually broadcasted show for audiences on both sides of the Atlantic. While this year’s Muuseumiöö theme was “Öös on aega” (“Time in the Night”), the show’s theme was adapted into “Öös on väliseesti aega” (where väliseesti means “Estonians abroad”), focused on the time väliseestlased—Estonians who had to leave their homeland after the Second World War—have spent in Canada.

With VEMU ÖÖTV, viewers got an exclusive look into the distinct heritage and history of Estonians in Canada. There was a tour of the extensive VEMU collection, the largest collection of Estonian culture outside of Estonia. Archival videos that are seldom played publicly were shown, too. Those who watched discovered the home of VEMU: Tartu College. Now celebrating its 50th anniversary, Tartu College is a beacon of post-war architecture in Canada and a symbol of the Estonian diaspora.

It’s no secret that Estonians’ appreciation for music came to Canada with them. To cap off the show, the best of VEMU’s vinyl record collection was spun, accompanied with a live chat with musicians Andres Raudsepp, the Lindau Sisters, and the band Megapop; about their records, concerts, and more, for all of the music lovers out there. Vaiko Eplik and Maarja Merivoo-Parro, who in 2015 compiled an CD album of väliseesti pop music, dipped back into their memories, talked about their first contact with väliseesti music, and played their favorite pieces.

177 people watched the VEMU ÖÖTV program live stream, which ran smoothly thanks to Rasmus Rattas’ proficient technical support. By the beginning of September, 351 viewers had seen the program. If you haven’t seen it yet, you can watch it on the VEMU YouTube channel: https://www.youtube.com/watch?v=OswCFVc4UKU&t=89s 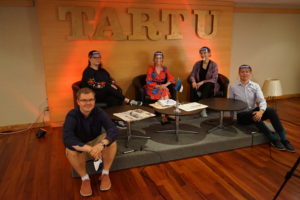