VEMU had a very eventful and busy spring season. On April 1st the opening of the Kotkajärve Metsaülikool (Forest University) 50th anniversary exhibit took place at Tartu College. The exhibition looks back on the exciting years since 1967, when people of Estonian heritage began going to this total immersion cultural camp in the deep woods of Muskoka, Canada to reconnect with their roots.

On April 19th, VEMU celebrated World Book Day with a journal making workshop Giving Books a New Life. Artist Laani Heinar led over a dozen participants in creating new journals out of old books to give them a new life and new home. Everyone left with new skills, new journals to take home, and a smile on their faces.

On April 30th, VEMU hosted its 6th Fundraising Dinner highlighting Estonia’s Year of Children and Youth Culture by featuring the special guest from Estonia, the poet, children’s author, and librettist Leelo Tungal. Dinner was prepared by young Toronto chefs Alanna Fleischer and Brian Cheng from catering company The Edible Story. Leelo Tungal also gave a lecture at Tartu College on May 3rd on the topic of Our Fairytale Mother Language. 25 Years Since the Sten Roos Fairytale Competition.

On May 10th, the E. Tampõld Chair of Estonian Studies Professor at the University of Toronto, Jüri Kivimäe gave a lecture on the topic of The Meaning of the Lutheran Reformation in Estonian Culture to celebrate 500 years since the beginning of the reformation. This lecture was his last lecture as the Chair of Estonian Studies Professor before retiring from the University of Toronto.

On June 7th, ESC/VEMU and the Estonian Central Council in Canada hosted a reception in honour of the Republic of Estonia’s Minister of Culture Indrek Saar. He was on a business trip to Ottawa and Toronto and was accompanied by the Republic of Estonia’s Ambassador in Canada Gita Kalmet, the Vice-Chancellor of Diversity Piret Hartman, and the Minister’s Advisor Maris Sild. The Minister of Culture gave a short introduction and then answered the questions of those who attended. VEMU also organized a business lunch for the Minister with Toronto musical programming coordinators, including Koerner Hall’s Artistic Director Mervon Mehta, Soundstream Festival Director Lawrence Cherney, the veteran music promoter Derek Andrews, and the musician Norman Reintamm, who has organized a number of concerts featuring musicians from Estonia.

The VEMU season concluded with the Annex Family 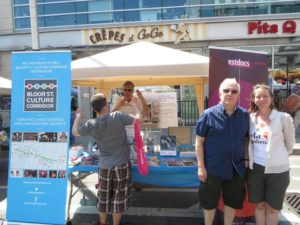 Festival, which took place along Bloor St. between Bathurst and Spadina on June 11th. VEMU, Metsaülikool (Forest University), and EstDocs introduced Estonia, Canadian-Estonians, and their various ventures to Torontonians on this sunny day. The MÜ 50! exhibit was also open to the public and short films from the EstDocs short documentary film competition were screened.