2019 is UNESCO’s International Year of Indigenous Languages. In Estonia, as well as in Canada at the Museum of Estonians Abroad, VEMU, the Year of Estonian Language was celebrated.

Wednesday, September 11, a book launch of Selected Works by Urve Karuks was held at Tartu College. The book of works by the prominent Canadian-Estonian poet Urve Karuks was compiled by Sirje Kiin and Linda Karuks and includes poems that have not been published before. The book was first launched at the Writers’ Union House in Tallinn on May 29, 2019. 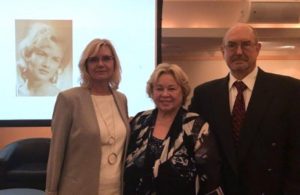 The launch event in Toronto included speeches by the literary scholar Sirje Kiin and the children of the poet, Linda Karuks, Alar Karuks. Urve’s poetry was read by Eveli Kõrre, Ellen Valter, and Eerik Purje. The Estonian actor Anu Lamp also joined the poetry reading via Skype. Toivo Kulpa performed with the guitar.