On June 15, an exhibition “Three Friends: Damušis, Kazickas and Ambrozaitis” was opened in the National Library of Lithuania. One of the main organizers of the series, the director of Adolfas Damušis Democracy Studies Centre, Vidmantas Valiušaitis, noted, “All three were the children of the independent Republic of Lithuania: during that time, they were raised, grew up, received an education, and distinguished themselves. Their youth coincided with the fate of Lithuania, which was being devastated by Soviet and Nazi occupations. Therefore, one of the most striking links connecting them was the resistance to the occupation regimes of 1940-1944, the commitment to freedom, and the consistent and enduring struggle for democratic Lithuania in 1944-1990. They were lucky to succeed professionally in the West, to witness Lithuania’s independence in the 1990’s and to return to their homeland.”

The exhibition is aimed to highlight the life of each of the three activists. Although, all three men were concerned with political and social issues, at the same time they were family persons. The fight for homeland’s freedom, the most significant moments in one’s professional and public life, and most importantly, the great joy of being able to return to free Lithuania, are other important milestones of the exhibition.

The opening of the exhibition was followed by a two-day conference “The Fight for Freedom and the Lithuanian Diaspora: Legacy, Present Concerns and Expectations.” 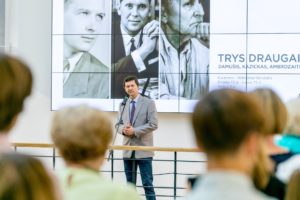 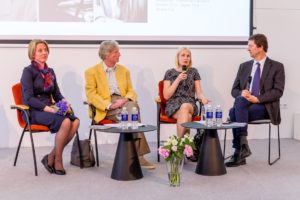 The participants discussed various topics related to the Lithuanian diaspora and its relationship with the homeland.