The Screening of a Film by Dutch-Estonian Director

On 25 November, 2019 the screening of a film “Coming Home Soon: The Refugee Children of Geislingen” by Dutch-Estonian film director Helga Merits took place at the National Library of Lithuania. The director’s latest film is about Estonian children who fled Estonia in 1944 with their parents, sometimes with only one parent or relative, and spent the war in the Geislingen refugee camp in southern Germany.

Despite the testimonies about extreme poverty and especially difficult living conditions during and after the war, Merits says that her film is also about hope and inspiration. And while the documentary tells a story of Estonian refugee children living in the Geislingen refugee camp from 1945 to 1950, it is also the history of many Eastern Europeans. The film draws parallels with the current situation of the refugees in Europe as well. “Coming Home Soon” has already been screened in 11 countries and 24 European cities.

“Coming Home Soon” is the fifth documentary film by Helga Merits. All her films tell stories about people who were forced to leave their homes and establish new lives in new and unfamiliar places.

The director was present at the screening and answered questions from the audience. 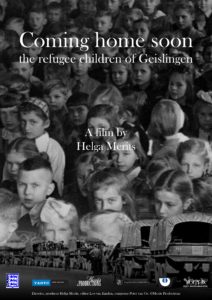