On April 8, VEMU organised together with the Finnish Studies Programme at the University of Toronto and the Swedish Womens Educational Association International Toronto, an online lecture about the Swedish speaking minority in Estonia. The lecture “Liberation or salvation? The Vormsi/Ormsö Estonian Swedes between Swedish Evangelism and Russian Orthodoxy 1873-1887” was given by Trond Ove Tøllefsen who teaches history at Uppsala University, Sweden, and is consulting professor in peace and conflict studies at the Free University of Catalunya. Originally, the lecture was planned to happen in the premises of Tartu College at the end of March but the COVID-19 situation changed everything.

However, as the lecturer decided to stay in Toronto, we turned his presentation into an on-line lecture. For VEMU this was the first time to organize a real-time on-line lecture in our YouTube channel, so we were a bit anxious how it would turn out. Fortunately, thanks to Rasmus Ratas´ professional assistance it was a success. Some 30 people followed the talk in real time, and the lecturer was able to take questions via chat box and give his answers directly to all of them.

Trond Ove Tøllefsen’s interesting talk gave the listeners a vivid picture of the lives of the Swedish-speaking farmers on the Estonian island of Vormsi/Ormsö from the High Middle Ages to 1944. How the islanders became the subject of different cultural, religious and political battles between Sweden and Russia, Protestant revivals and the Russian Orthodox Church. The presentation was clear and entertaining also to non-historians. The good thing about on-line lectures is that the recording is still available at VEMU’s YouTube Channel. So if you missed the lecture in April, you still have a chance to watch it here: https://www.youtube.com/watch?v=va9OgwEVsYA 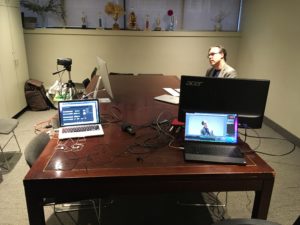