National Fashion Exhibit at the Estonian National Museum in Tartu

In October the exhibit “From the Village Road to the Red Carpet: A Hundred Years of National Fashion” was opened at the Estonian National Museum in Tartu. The exhibit focuses on patterns and elements borrowed from Estonian folk costumes that have been used in contemporary fashion beginning in the 1920s until today. 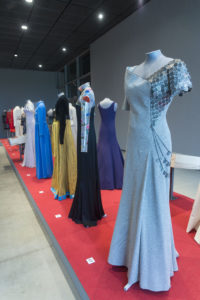 Searching for one’s family roots, with support from the past, is characteristic of Estonians and one of the central aspects of our identity. Estonian national costume has endured for more than a hundred years, and been in a rather noteworthy position in Estonian public life. A wider revival of folk costume as festive clothing began in the 1920s. During the following decades the development clearly followed two paths. On one hand, the making of authentic national costumes following the ethnographic example was supported; on the other hand, the folk costume elements and attributes (patterns, cuts and materials) were used both by professionals and amateurs for designing modern clothing.

The exhibit also features 17 mannequins that demonstrate the importance of this topic in Estonian communities abroad. In the aftermath of World War II nearly 70,000 refugees fled from Estonia to the West, where at first, family lives continued in Germany and Sweden. Later, larger communities were also born in the USA, Canada, Australia, and Great Britain. While being detained in the German DP camps, people started to make clothing with national patterns, leather items, and jewellery.

By the end of 1952, a home decorating and handicraft magazine Triinu was being published in Sweden (later the headquarters of the magazine eventually moved to a Canadian publishing house Estoprint Ltd). Since the very beginning, in almost every issue, instructions were published for making a folk costume from an Estonian parish. These same patterns were also suggested for decorating fashionable dresses and accessories.

It was stressed, that a national ornament is an important accessory and testimony for an Estonian woman with handicraft skills, especially in a foreign environment, which she should try to carry with her consciously, and then pass on to her descendants. National handicraft as a part of the national culture soon became one of the pillars of Estonian identity in exile. Not only was the copying of old patterns considered important, but also their improvement by re-design. If necessary, it was advised to change the material, the choice of colours, and the measurements of the pattern according to modern demands.

It was found that it was possible to assert the Estonian national pride internationally by using Estonia’s cultural originality. Estonia, the Estonian people, and Estonian culture were introduced both in smaller places, and at larger Estonian events, such as the ESTOs, the USA West Coast Estonian Days, and the Australian Estonian Festivals.

Patterns of the national costume – sash/belt patterns, sleeve patterns, skirt stripes, the eight-pointed cross, the flower, the lozenge shape, the strawberry, and the Lily of the Valley (Convallaria) – are all beautiful and well-known to Estonians. These images have always carried a deeper message, as a part of national propaganda, in helping to resist a foreign ideology, supporting the national pride, and manifest of being an Estonian.