On November 2nd, the oldest member of the Baltic Heritage Network, Mai Raud-Pähn, celebrated her 100th birthday. Mai joined the organization during its early years as the leader of the Stockholm Estonian Archives Group. She has been a BaltHerNet honorary member since 2014.

A jubilee party took place on November 5th at the initiative of the Association of Estonians in Sweden (AES). It was a modern hybrid event: Mai and Sirle Sööt, the chairwoman of the AES were together at Mai’s house, some guests gathered at the Stockholm Estonian House, the rest of the guests were at their homes and everyone celebrated together over Zoom. We looked at Mai’s photo albums, listened to the jubilarian’s presentation on silver handicrafts, enjoyed musical interludes, and heard many well wishes. BaltHerNet also sent a video greeting to Mai. 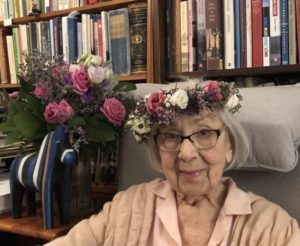 Mai Raud-Pähn was born in Pärnu. She was able to become an elementary school teacher in Estonia and taught for three years. However, in the fall of 1944 she had to flee – first to Germany and later through Denmark to Sweden.

In Sweden, Mai held various positions before she was able to continue her studies in art. She studied calligraphy at night courses and later at the Drawing Teachers Institute. Following graduation, she was a drawing teacher in Visby. From 1959-1964, Mai studied art history, archaeology, ethnology and started researching silver handicraft with professor Sten Karling at the University of Stockholm. In 1972, she received her Licentiate Degree with her thesis „Silversmiths in Tallinn 1474-1659.“

In 1980, Mai Raud-Pähn began working at the Association of Estonians in Sweden office as a secretary. She became the Office Director in 1987, which she held until her retirement. During the years 1987-2014, she was the Editorin-Chief of the magazine Rahvuslik Kontakt (National Contact). Mai has been active in many organizations: the Swedish Estonian Association Board of Representatives, Estonian Association of Academic Women, Estonian Women Students´ Society, TRIINU, and the Society of Friends of the Estonian National Museum. She was also a member and secretary of the active Estonian Scientific Society in Sweden.

Mai has been to many of the BaltHerNet summer schools and conferences, sharing her personal memories with us and discussing the work of the Swedish Estonian Archives Group. She was also our primary assistant when we organized an info day about Estonian archives abroad at the Stockholm Estonian House in 2009.

Mai is quietly wordy, witty, infinitely active, and a true lady, who will never lose her poise. Mai is also quite lucky. At the BaltHerNet summer school closing party there is always a large raffle, where the prizes are books, films, and the grand prize is free participation at the next summer school. Mai has won the grand prize twice and without cheating. The last prize she won at the 2017 Haapsalu summer school, she has not yet been able to use…

In closing, one more memory from the summer school in 2017. We were listening to Anton Pärn tell us about the artist and the history of the house at the Ants Laikmaa Museum. When there was a pause, Mai started telling us how she had met Laikmaa in real life… The museum guide and all of us with only our knowledge from books, went pale – she spoke so simply and naturally of this person we had only ever read books about. She spoke as we would, if we had run into Hando Runnel (for non-Estonians, this is a famous living Estonian poet) on the street in Tartu again. Thus, we are all living bridges between different times, sharing stories and life experiences across generations. It is wonderful that Mai is our bridge to our people’s past. We would like to thank her for all she has done during her long life and we wish her happiness and good health!