The Lithuanian Minister of Culture Visited the United States

In the early September, the Lithuanian Minister of Culture, Mindaugas Kvietkauskas, visited New York and Chicago. In New York, the Minister met with the director of YIVO Institute for Jewish Research, Jonathan Brent. They discussed the cooperation between the Institute and Lithuania and other relevant issues in preparation for next year’s commemoration of Vilna Gaon (born Elijah ben Solomon Zalman) and Lithuanian Jewish history. 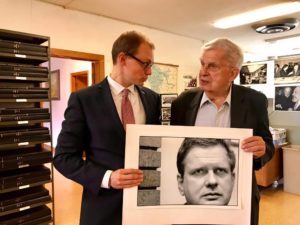 Minister of culture (on the left) with Lithuanian writer Tomas Venclova

The Minister participated in the Litvak Days organized for the first time in New York and Chicago on the initiative of the Consulate of the Republic of Lithuania in NY. The event included a public lecture and three debates. In New York, Kvietkauskas, along with writer Tomas Venclova and Prof. Saulius Sužiedėlis participated in the discussion “Challenges of Multiculturalism in Contemporary Lithuania.”

While in New York, Kvietkauskas also visited one of the world’s largest American avant-garde film archives, Anthology Film Archives, founded in the early 1960s by Lithuanian-American Jonas Mekas. The Minister participated in the opening of the exhibition of the Lithuanian American artist Vytautas Ignas and met with representatives of the Lithuanian Alliance of America and the Lithuanian National Foundation. 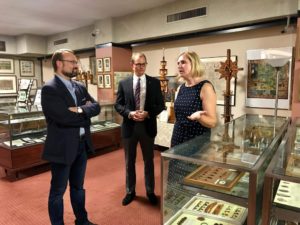 The Minister of Culture visited the Balzekas Museum of Lithuanian Culture in Chicago.

Photo credits: General Consulate of the Republic of Lithuania in Chicago.