Lectures and Exhibit Opening at VEMU

In the fall season, the Museum of Estonians Abroad, VEMU organized several lectures at Tartu College expanding on different historical events and traditions both in Estonia and among the Estonian Canadians.

On September 28, Tartu College’s 49th anniversary was celebrated with the Dr. Vello Soots Memorial Lecture by the founder of Kalev Estienne, Evelyn Koop, and opening of the exhibition „Estonian Sport in Canada.“ Kalle Voolaid and Toomas Koitmäe from the Estonian Sports and Olympic Museum in Tartu spoke about the exhibit and their partnership with VEMU. 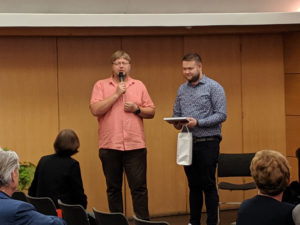 On October 23, Andres Raudsepp gave a lecture on the Estonian Song Festival tradition. On November 6, Prof. Andres Kasekamp spoke about the Silent Era in Estonia.