A Sunny October in Siberia

The last October was surprisingly sunny in Siberia and full of bright events.

We organized (Mickklipäev) MICHAELMAS FESTIVAL IN SIBERIA, in which “Rõka külaselts ja sõbrad” group from Estonia and a brilliant master in the national Estonian art and costumes from St. Petersburg Society of Estonian Culture Tatiana Sigacheva took part. 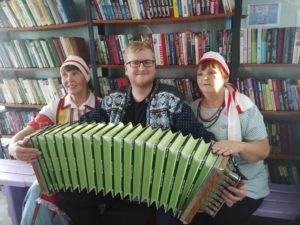 Michaelmas Day or Harvest Day, folk holiday was first arranged in Krasnoyarsk in 2005 on the initiative of Krasnoyarsk EESTI Cultural Autonomy. The national tradition demands that this holiday take place in a rural area and we have regularly organized it, since 2015, in the Khaidak Village. The Estonian and Seto dwellers of the village and Estonians we invited from other villages were happy to gather and share the joy of the holiday. This year, the event was also arranged in the New Pechora ( Uus Petseri)and Upper Suetuk ( Ülem Söetuk) Villages. We covered 2000 km between the three villages and, wherever we stopped on our way, local people met us with great hospitality. As this was a bumper harvest year in Siberia, the tables were near to breaking with tasty dishes. Estonian villagers were very grateful to the wonderful musician Henrik Hinrikus who masterly played Teppo lõõts (a kind of accordion) and sang. Those who heard him will sure remember him long. Michaelmas Day is the day of peace, forgiveness, reconciliation, happiness, and thanking God for life. After harvesting comes the time for needlework and folklore. By Michaelmas Day, “turnips should be already in bins and a woman at home”.

Tatiana Sigacheva taught children to make national Estonian dolls. Every child who took her lessons left with a doll made by him/herself.

A well-known Estonian cuisine popularizer Tauno Laasing told the people the cuisine secrets and even cooked various tasty things himself using the products brought by the visiting Estonian group. Peipus dishes were a real discovery for us. We tasted, for the first time, onions and fish found around and in the Peipus.

The day we came to the Upper Suetuk Village, it was very warm (+19 C), “golden” autumn. Henrik Hinrikus said ‘Both people and animals are happy here in their own ways’.

However, it was time for us to go back to Krasnoyarsk. On October 16, Days of Estonian Cinema began. The Head of the Estonian Cinema Institute Edit Sepp gave a lecture at Krasnoyarsk Cinema House. This was the first lecture on the history of Estonian cinema and it aroused a lively interest of the audience, the theater was full. The Councilor on Cultural Issues of the Embassy of Estonia in Moscow Dimitri Mironov was translating the lecture from Estonian into Russian. The best Estonian films for adults and children were shown during the following week.

The traditional Day of Finnish-Ugrian Peoples was arranged on October 19. The holiday began with a tea party and lesson on making Sipsik Doll, which Tatiana Sigacheva gave to both children and their parents. She read passages from “Sipsik”, a story by Estonian writer Eno Raud. At the end of the lesson, “Sipsik” animated cartoon was shown to the audience.

Then was the opening of “Finnish-Ugrian Peoples’ Dolls” exhibition, which Tatiana Sigacheva brought to Krasnoyarsk. The exhibits presented were made under Large Doll School Project based on the materials provided by the Russian Museum of Ethnography and Helsinki Museum. Among the visitors of the exhibition were teacher and students of the Folklore Art Department of Siberian Institute of Arts, who then tried to make non-sewed Finnish-Ugrian dolls with the help of Tatiana Sigacheva.

Then there was music, Estonian, Seto, and even a song in līvõ kēļ (a coastal Finnish language), followed by singing and dancing in a ring and Külli Kell taught all comers how to play national games, sing songs, and dance. The day the guests departed was still warm. 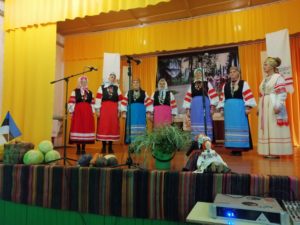 On the last day of October, the Annual Krasnoyarsk Book Fair opened. As many as 250 publishing houses brought their books to the fair. The organizers made the fair a big cultural event. There was an Estonian book spot. Alexandra and KPD, Estonian publishing houses, sent books by modern Estonian writers Andrus Kivirähk, Jaan Kaplinski, Leelo Tungal, Maarja Kangro, Juri Kuuskemaa, Piret Raud, Rein Raud and others. Some of them are in Russian and some, for children, are bilingual to help learn Estonian. 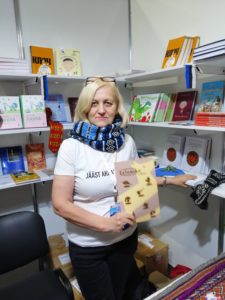 We were volunteers and recommended the books to the visitors.

We sold quite a few books to Russian and Estonian literature lovers, bookshops and libraries. A bunch of newly published books was sent to the Ülem Suetuk Village. Winter is already round the corner! Well, it is not a problem for us how to while away long winter evenings.
Let’s read Estonian books and remember the sunny October we spent together with our friends in Siberia.