Discussion on the Preservation of Lithuanian Identity Abroad

Every summer in August, the Center organizes a month-long Lithuanian language and culture course. Almost 100 students – from China to Argentina – participate in this summer’s course. Some students are of Lithuanian descent, while others, and there are many of them, want to study Lithuanian language because of their deep interest in Lithuanian culture. Vilma Leonavičienė, the director of the Center, noted that every participant has an exciting story about his relation to Lithuania to tell. For some students the summer language course is the first chance to get acquainted with Lithuania and its people, since they have only heard about this country from their grandparents or great-grandparents. However, there is a substantial group of students who have been returning to the summer language course in Vilnius. 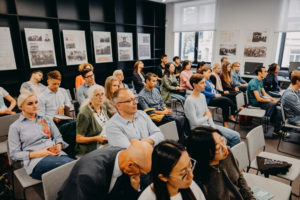 The discussion drew a huge crowd.