This year the focus was on themes surrounding photo 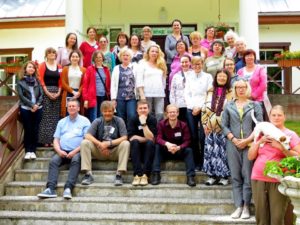 heritage, as in this digital era photo collections are growing faster than ever, access to photos online is easier, and requirements for the use and publishing of photos have increased. On the opening day of the summer school, June 26th, the group visited the new buildings of the Estonian National Museum and National Archives of Estonia in Tartu. During the tours, the group was also introduced to the two large memory institution’s photo collections and photo preservation procedures. The day ended with the drive to Koke where the next two days were filled with lectures, workshops, and discussions about collecting, describing, and digitizing photos, as well as discussions about how to use photos in publications, films, and exhibitions. A separate discussion took place regarding legal questions surrounding the use of photos, focusing on copyright and the protection of personal information.

The President of NGO Baltic Heritage Network, Piret Noorhani, who works as the Chief Archivist of the Museum of Estonians Abroad (VEMU) in Toronto, introduced the photo collection at VEMU. There are currently 140 described series with about 10 000 photos, which have all also been digitized and catalogued in the new online database www.ra.ee/apps/valiseesti, created with the help of the National Archives of Estonia and funded by the Compatriots Program.

Jüri-Karl Seim gave an overview of the Swedish-Estonians’ photo heritage. He highlighted that although a group of volunteers has been working on identifying photographers and individuals from photos for years, the Swedish-Estonian archive photo collection remains unsystematized. A portion of photo collections from the Union of Estonians in Sweden has been donated to Estonian memory institutions, primarily to the Estonian Filmarchives of the National Archives and the Estonian Literary Museum.

Tiina Tael described photo collections of Estonians abroad located at the Estonian National Museum. Photos include those of the Estonian language islands (Latvian and Russian territories) and the emigration of Estonians to Russia at the end of the 19th century (to Pihkva, surrounding area of St. Petersburg, Krasnoyarsk region, Caucasus, and the Crimea), as well as a smaller number of photos of repressed Estonians, Estonians who fled in 1944, and communities of Estonians abroad. The digitized photos with descriptions can be found on the museum information system MuIS (http://muis.ee).

Ave Marie Blithe gave an overview of the photo collection at the Estonian Archives in the U.S. Their Estonian photo collection covers both the period of refugee camps in the second half of the 1940s (primarily life in the Geislingen refugee camp), and the period that followed in the United States. The refugee camps portion of the collection had slowly started to be digitized. However, due to most of the archival work being done on a volunteer basis and very limited funding, large scale digitizing work is not a realistic goal for the near future.

Anu Korb from the Estonian Literary Museum spoke of Russian-Estonians’ personal photo collections, the earliest of which are from the early decades of the 20th century when the primary mode of capturing time was with an elegant portrait or some other form of posed photo done by a professional photographer. Common photo types from that period include wedding and funeral photos, as well as photos of children or of doing work. In the mid-20th century photography was not an everyday occurrence and was not an accessible hobby for most small town communities in the Soviet Union.

Ellu Maar examined Estonian photographers who lived abroad in the context of the exhibition by the Art Museum of Estonia. The Art Museum of Estonian began researching the diaspora topic in 2010, which led to the “Photo of Estonians Abroad” exhibition. During the preparation of this exhibition, a number of photo collections from the archives of Estonians abroad were used, and the contacts from that time have remained useful in preparations for exhibitions that followed. Ellu also spoke about her work on the monograph “Eye-Catcher. The Life and Work of Vello Muikma,” which was published by VEMU in 2016.

On the third day of the summer school on June 28th, legal questions were the focus of discussions. The lawyer Anne Kalvi gave her perspective on photo copyright. She believes that copyright laws concern everyone, as everybody is an author. Understandably, there are differences in the legal culture of every country, although, she recommends both photographers and users be as up to date as they can (in Anglo-American countries the approach to copyright tends to be gentler, while in Europe it is more strict).

The initiator behind the website “Ajapaik,” Vahur Puik, introduced an interesting question as the title of his presentation: who is the owner of photos in museum collections? Does the photo belong to the one who owns it, or to the one who captured it, or the individual in the photo? There are a number of different possibilities, and many of them are in opposition with each other. If the photo is in the collection of a memory institution, then as a rule it belongs to the memory institution. However, this does not give the institution the right to own the copyright of the photo, as the copyright still belongs to the photographer.

In the realm of the online life of old photos, Marin Laak gave an overview of the website Kreutzwald Century (Kreutzwaldi sajand) photos. In the cultural history archive photo collection at the Estonian Literary Museum, there are about 275 000 images, including 246 registered funds, about 235 000 of which are available digitally. The Kreutzwald Century website covers Estonia’s cultural history from 1800-1940 with about 12 000 digitized photos.

Marin Laak was followed by Vahur Puik’s introduction of the opportunities virtual crowdsourcing allow by demonstrating the face recognition feature of /on? Kreutzwald Century and the “Ajapaik” website (http://ajapaik.ee), which attempts to match locations in photos with current images of the locations. Tagging the locations in the photos and creating the descriptions is meant to be done through crowdsourcing. Since spring 2016, users have been able to add photos from their own personal collections to “Ajapaik.” Today, there are over 100 000 photos on “Ajapaik” with about 60 000 tagged with locations, all done with the input of over 7500 volunteer users.

Ivo Kruusmägi spoke about the Wikipedia photo bank and its opportunities. There are very strict rules associated with using these photos; all the photos included in articles are checked for copyright before the articles are officially published. Wikimedia Commons covers about 40 million photos, to which all institutions or associations are welcome to add their photos.

In the last part of the summer school, photos were discussed as resources for research. Literary scholar, Tiina Kirss, spoke about family history photos using the examples of the Estonian Literary Museum life stories competition, which closed in spring 2017, and Maret Masar’s childhood story.

The final speaker of the summer school, artist Ly Lestberg, presented the question of whether Betti Alver as a creator, has been fabricated against her will. Ly Lestberg conducted six video interviews for the permanent exhibition “Betti Alver – in Light and in Shadows” opened in autumn of 2016, where she asked people who know Alver’s work well, how they see one of Estonia’s most renowned poets as a creator. The results of these interviews can be seen in their most genuine context at the Betti Alver Museum in Jõgeva (www.bettimuuseum.eu).

Other summer school activities included a workshop on the “Ajapaik” website, a round table discussion about a festival of exhibitions by Estonians abroad for the ESTO festival taking place in 2019, and the NGO Baltic Heritage Network annual meeting. Two new members were introduced at the meeting; now there are a total of 41 individual members and 5 collective members. The young and very talented accordion king, Toomas Ojasaar, played, sang and told stories at the summer school closing party.

On the last day, the participants experienced field practice with Vahur Puik’s “Ajapaik” in Rõuge. This was followed by a visit to Ööbikuorg (Nightingale Valley) and the accordion museum at a legendary musician’s … home.

BaltHerNet’s next larger event is the 5th international conference, which will take place from June 27th – 29th, 2018 in Tartu at the Estonian National Museum.