The Book “The Descent of Hope. US Radio Broadcasts to Soviet Lithuania“

The end of WWII did not bring freedom and liberation for all countries and nations. Central and Eastern Europe fell into the grip of the Soviets and found itself isolated from the free world. Immediately after the war, relations between the Soviet Union and former allies began to deteriorate. It became clear to the Western world countries that the Soviet propaganda was a serious challenge to their national security and that measures needed to be taken to counteract this threat.

The position of the US as one of the superpowers had been particularly important. Assessing the technological possibilities of the time, soon it was realized that radio broadcasts penetrating through the Iron Curtain could be one of the most effective means of ideological struggle against the USSR. The US government devoted a lot of human and material resources to organizing radio broadcasts to Soviet-controlled areas. The waves of US radio stations also reached Lithuania and contributed greatly to the spread of Western and democratic values, the rise of national awareness, and the formation of a critical position towards the Soviet Union.

A book by historian Inga Arlauskaitė Zakšauskienė, “The Descent of Hope. US Radio Broadcasts to Soviet Lithuania” published by Vilnius University Press analysis this phenomenon.

A conversation with the author of the book led by Dr. Ilona Strumickienė, director of the Adolfas Damušis Center for Democratic Studies at the National Library of Lithuania, can be found on Youtube (in Lithuanian):
https://www.youtube.com/watch?v=p2N0o2gePkQ&feature=emb_logo. 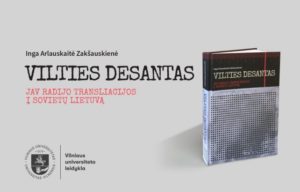 The book is dedicated to US radio broadcasting to the USSR. 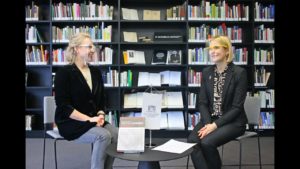 The author of the book (left) talks to Dr. Ilona Strumickienė, director of the Adolfas Damušis Center for Democratic Studies.