We received sad news in the heart of summer: after a serious illness Anne Valmas has left us. She was a founding member of the Baltic Heritage Network, member of the Archives of Estonians Abroad Working Group, a good friend, and a smart and energetic worker.Anne graduated from the department Estonian Language and Literature, specializing in Library Studies from Tartu University in 1965. She began her career at Keila City Library, continuing on to three larger libraries in Tallinn: from 1966-1979 as Bibliographer and Head of Department at the Tallinn Polytechnic Institute Library, from 1979-1989 as the Culture and Art Information Department Director and Customer Service Director at the F. R. Kreutzwald National Library, and from 1989 onwards as the Head of the Department of Estonian Literature Abroad, Director, and until recently a Researcher at the Centre. 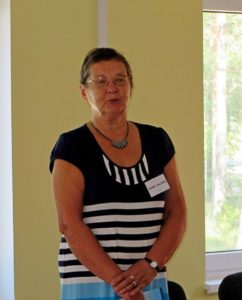 Anne Valmas was the re-establisher of the Estonian Librarians Association (1988), Chair of Directors from 1994-1998, and Honorary Member since 2016. Joint conferences between the association and publishers took place at her initiative, which helped in creating connections between out mutual interests.

Anne Valmas has done remarkable and prominent work creating personal bibliographies, as well as creating databases of bibliographies and personal histories. In 2004, at Anne’s initiative the Eesti raamatukogunduse biograafiline andmebaas (Estonian Library Biographic Database, ERBA) was created, to which additions continue to be made. She has been a member of the Editorial Board for the Estonian Year of Books Head Committee, and the magazines “Kultuur ja Elu” (Culture and Life), and “Raamatukogu” (Library). As an author, Anne has received a number of national awards, including the Friedrich Puksoo Award (2004). In 2001, the President of the Republic of Estonia awarded Anne Valmas’ work in developing Estonian libraries with the White Star IV Class Order.

We have much to learn from Anne. In addition to the retrospective Estonian national bibliography editions “Eesti raamat välismaal 1944-2010” (The Estonian Book Abroad 1944-2010), two more books authored by Anne were published this year: “Varjust valgusesse. Erihoiust väliseesti kirjanduse keskuseks (1974-2017)” (From the Shadows Into the Light. From Special Collections to the the Centre for Estonian Literature Abroad (1974-2017), and the collection of articles “Pagulaskultuuri jälgedel” (Following the Steps of Refugee Culture) – which are signs of Anne’s perseverance until the end. We will remember her with great thanks as an expert and supportive colleague, as well as a warm-hearted person.