New Publication: “Sustaining the idea of Latvian independence in exile 1945-1991” – a collection of documents

The idea of possible restoration of their homeland’s state independence was highly important among Baltic diaspora all around the world during the whole time the three Baltic states – Estonia, Latvia and Lithuania – were under the soviet rule. Terming themselves “exiles” to even more stress the fact of forceful occupation of Baltic states and in consequence, the unwilling nature of their being abroad, Latvian diaspora acted in various ways to sustain 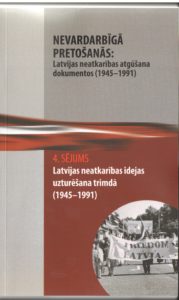 This book of almost 400 pages contains 140 documents in Latvian language, covering time period from the last days of World War Two to the August Putsch of 1991, when Latvian independence was in fact fully restored. Aim of this publication is, through the scope of original documents, to show the immense diversity of exile national-political work both geographically and thematically, and to show how a large number of different exile organizations in all host countries in very varied ways for 46 years continued to sustain and promote this one for them very important idea – the idea of Latvian independence. Accordingly, authors of this volume have tried to represent in it all major events in diaspora national-political life and to give an example of political work done not only by large main diaspora organizations, but by all kinds of different organizations in different countries as well.

Documents for this volume have been chosen among many thousands of such in numerous archives all around the globe; volume contains documents from National archives of Latvia, USA, Australia, Great Britain, Sweden, Germany, New Zealand, several USA presidential archives, archives of diaspora organizations and private archives of individuals and others. Three reports on diaspora activities by the KGB of the Latvian SSR are also included in the volume and show how diaspora activities were perceived by this institution. Preparation of this volume for publication took seven years and most of the documents have been published for the first time.

This collection of documents is published by the Latvian Academy of Sciences Baltic Center for Strategic Studies and is the 4th volume in the series of document publications “Non-violent resistance: documents (1945-1991) related to restoration of Latvian independence”. First three volumes comprise documents on non-violent resistance in Latvia from 1945-1985 (vol.1), during the Awakening period from July 1986 to May 1990 (vol.2) and during the transition period to the full de facto restoration of independence from May 1990 to 21st of August 1991 (vol. 3).

As documents in this newly published volume testify, diaspora activities to preserve and promote the idea of Latvian independence were surprisingly varied, diverse and creative. The authors of this volume hope that it will spark an additional interest for the very interesting and not so very well-known pages of Latvian diaspora history.