With dozens of events held in Estonia, Latvia, Lithuania, Russia and the United States, Baltic Heritage Network has helped create an international forum for emerging scholars to present their work. The event series has also been crucial for developing mutually beneficial working relationships between global Baltic heritage professionals.

The current season started out with anthropological participatory observation in the former Estonian village Simititsa in Russia. BaltHerNet researchers joined descendants of the villagers at the cemetery where they helped clean the plots and took part of the erecting of a monument in honor of the ancestors buried in foreign soil. They also visited the Estonian St. John’s church in St. Petersburg and experienced walking a segment of the route which the largest mass demonstration in support Estonian autonomy took in 1917. The seminar also touched upon other Finno-Ugric groups in the region. 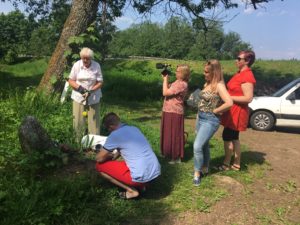 The follow-up event took place in Lahemaa, where one of the people born in Simititsa opened up her home and photo collection for further exploration. On December 11th, new research findings from a wide range of topics from Latvian Entrepreneurship in the U.S. and Canada, to the history of Estonians in Kazakhstan will be explored in Riga, at the Latvian University during a pan-Baltic seminar.

The Baltic Heritage Network young diaspora researcher’s seminars are financed by the Compatriot’s Program, run by the Estonian Ministry of Education and Research.